Biologics are pharmaceutical agents produced by or extracted from biological sources, ranging from molecules to cells. Whereas chemical drugs are formulated and synthesized in a specific ordered process, biologics manufacturing relies on harnessing natural production mechanisms, reducing the amount of direct control that scientists have and necessitating additional diligence for consistent production.

Biologic agents tend to be at the forefront of biomedical research, and are often employed to treat medical conditions for which no alternative therapeutic option is available. To produce biologics, scientists must identify or create a biologic system that will continuously produce the target agent under the correct circumstances. The system of choice for the majority of biologics production is the cell, whether eukaryotic or prokaryotic. Typically, the optimal production cell candidate will be an immortalized cell line which is readily abundant and easy to culture.

Cells used as biologics factories can, but generally do not produce the target agent in sufficient abundance under endogenous conditions. To offset this problem, scientists introduce the genetic material encoding the desired molecule to the production cell. To increase the efficiency of this process, scientists use bacterial (a process known as transfection) or viral vectors (transduction) to transport and deliver the nucleic acids. Before this can take place, the vectors themselves must be integrated with the target sequence and then mass produced. 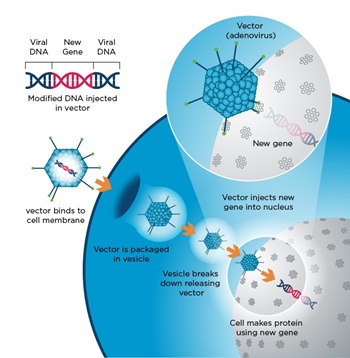 Viruses innately integrate their genetic material with the host cell machinery during infection, making them ideal vector candidates. There are several key factors in determining the suitability of a virus to serve as a vector. An ideal virus demonstrates genomic stability, cell-type specificity, efficient infection rates, minimal effect on infected cell physiology, and minimal pathogenicity.

Viral vectors are produced in a similar manner to other biologics. Viruses containing the gene of interest are allowed to infect cultured cells. The cells then produce and shed additional copies of the virus into the culture media, which is harvested for purification. The yield, purity, and quality of the viral vectors generated during this process affects the efficiency of the subsequent transduction procedure, which in turn modulates final biologic agent production quality and efficiency.

An effective centrifugation protocol is instrumental to optimize viral vector purification. High-speed centrifugation and ultracentrifugation effectively separate viral particles from cells and cellular debris, while analytical ultracentrifugation can identify and separate viral particles based on capsid density, a measure of viral cargo. This allows empty viruses and viruses which have only partially incorporated the desired genetic material to be removed prior to transduction. The ability to consistently generate abundant high-quality virus is critical for eliminating batch-to-batch variability in terms of quality and efficiency when it comes to production of the end-product.